Ten years ago, the Environmental Investigation Agency issued its first report on hydrofluorocarbons (HFCs) – a class of manmade gases that are hundreds to thousands of times more damaging to the climate than carbon dioxide. Turning Up the Heat was groundbreaking in its findings and recommendations.

“While good progress has been made to address both ozone depletion and climate change, these two issues have generally been treated as separate problems with separate solutions…If the Montreal Protocol continues on its present course, HCFC [hydrochlorofluorocarbons] and HFC emissions in 2015 are predicted to have over twice the impact on the climate than the required greenhouse gas reductions under the Kyoto Protocol.”
-Turning Up the Heat, 2006

In October 2016, the Montreal Protocol, often hailed as the world's most successful environmental treaty due to its success in committing the global community to stop using ozone depleting substances nearly 30 years ago, agreed to a global phasedown of HFCs. This deal will avoid more than 70 billion tonnes of CO2 equivalent emissions by 2050 – allowing us a fighting chance to avoid half a degree of global warming. However, the job isn’t finished. Implementation is what will guarantee the delivery of this climate win in reality. EIA will be watching countries’ progress throughout the phasedown, and will continue to provide recommendation and insight for successful transitions to climate friendly alternatives.

EIA has undertaken groundbreaking investigations into the illegal trade in ozone depleting substances (ODS) and has been closely involved in international ozone and climate negotiations for more than a decade.

2006 – EIA was a principle backer and supporter of an accelerated HCFC phase out and produced its first report on the topic, Turning Up the Heat.

2008 – EIA proposed an HFC phase out to the Montreal Protocol, presenting a Declaration for Action to the Meeting of the Parties (MOP) in Doha, Qatar. The United States used this declaration to propose workshops and discussion to explore the feasibility of an HFC phase down and the state of alternatives.

2009 – Formal proposals were submitted by Micronesia and the United States to amend the Montreal Protocol for an HFC phase down.

2012-2013 – EIA investigators discovered Chinese and Indian facilities of leaking HFC-23 gases, despite having destruction technology available, as well as funding from the UN Clean Development Mechanism to capture and destroy the gas. The findings were released in EIA’s groundbreaking report, The Two Billion Tonne Climate Bomb.

2014 – China announced it would eliminate 280 million metric tons of CO2 equivalent emissions of HFC-23. This monumental announcement came in direct response to The Two Billion Tonne Climate Bomb, which exposed Chinese factories of venting HFC-23 despite funding from the UN Clean Development Mechanism to captures and destroy these super greenhouse gases.

2015 – EIA cohosted workshops bridging A2 (developed) and A5 (developing) positions on finance and strengthening the Multi-Lateral Fund for an HFC phase down regime. The workshops reported and presented on widespread availability of alternative technologies.

2015 – Beyond the Dirty Dozen, a follow up to The Dirty Dozen, revealed that despite readily available climate-friendly alternatives, shockingly few supermarket chains are replacing leaking refrigeration systems or using HFC free systems in new stores.

2015 – At the 27th Meeting of the Parties to the Montreal Protocol, all 197 parties agreed to reach consensus on the Dubai Pathway to achieve an amendment to the Protocol to phase down HFCs in 2016. Throughout the year, EIA facilitated discussions on how to structure and finance a global agreement with regard to all parties, playing the role of a bridge between developed and developing countries.

2016 – India announced that its chemical industry must collect and destroy emissions of the most potent greenhouse gas, HFC-23, beginning immediately. EIA first exposed the HFC-23 crisis ten years ago, and carried out undercover investigations into HFC-23 venting in China and India in 2012 and 2013.

2016 – EIA was the only NGO to expose the state of obsolete safety standards acting as barriers to HFC-free technology and work on changing them.

2016 – World leaders secured a Kigali Amendment to phase down HFCs at 28th Meeting of the Parties to the Montreal Protocol. 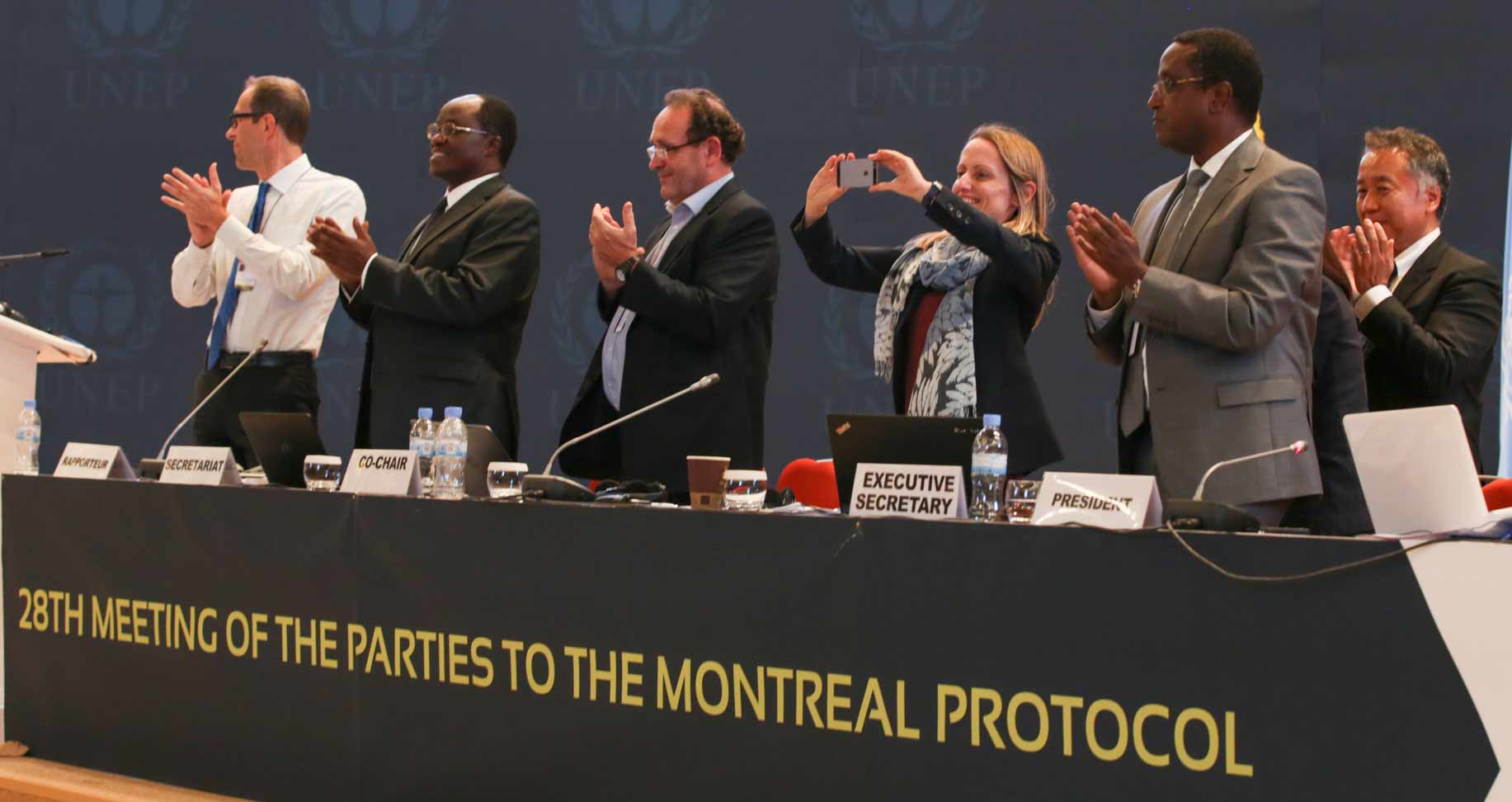 04/13/2021
Today the Environmental Investigation Agency (EIA) joined by several other organizations petitioned the U.S. Environmental Protection Agency (EPA) to restrict the use of super-pollutant hydrofluorocarbons (HFCs) in key cooling sectors, under new authority from the American Innovation and Manufacturing (AIM) Act. HFCs are man-made climate pollutants thousands of times more potent than carbon dioxide. HFCs are used mainly as refrigerants in air conditioning, heat pumps, and refrigeration, with other applications in foams, aerosols, fire suppression, semiconductor manufacturing, and solvents.

03/08/2021
A press release from the American chemical giant, the Chemours Company reveals the company’s unfulfilled promises and blatant disregard for the global climate.
See all Press Releases