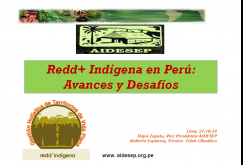 In the lead up to global climate negotiations under the United Nations Framework Convention on Climate Change (UNFCCC), indigenous groups presented proposals for inclusive climate mitigation and adaptation. During a public forum in Lima on October 27th, representatives from AIDESEP, the Interethnic Association for the Development of the Peruvian Amazon, informed attendees about the demand for indigenous land tenure in Peru’s Amazon region, ecosystem services provided by forests, and international legal frameworks that require respect for indigenous rights.

The presentation gave updates about inclusion of holistic interpretations of forests and land rights in diverse global carbon emissions mitigation schemes, which have recently received dedicated funding from international donors. “REDD+ Indígena Amazónico (RIA)” is a unique and broadly supported interpretation of Reduction of Emissions from Deforestation and forest Degradation (REDD) developed by AIDESEP and additionally adopted by COICA, the Coordinator of the Indigenous Organizations of the Amazon Basin. RIA includes respect for indigenous territorial rights and holds that the value of forests goes beyond their ability to filter climate-polluting carbon dioxide, to their ecosystem services, biodiversity, cultural and livelihoods benefits.

AIDESEP representatives put forth the organization’s views that carbon offsets from forest preservation and sustainable forest management must not be used as a free pass for polluters elsewhere. Rather, securing territorial rights for traditional forest inhabitants and holistic forest management should be a goal in itself. Citing drivers of deforestation, such as agroindustry, mega-infrastructure projects, dams, and extraction of minerals, oil, and gas, AIDESEP called for solutions to the root causes of forest destruction.

AIDESEP confirmed that at least 20 million hectares of traditional indigenous territory is pending state recognition and titling in the Peruvian Amazon, an area about the size of the US state of South Dakota. With their lands untitled in these forested areas, indigenous peoples have little recourse against invasions by illegal loggers or other outsiders. Conflicts arising from these invasions in the Peruvian Amazon recently led to the murder of indigenous Ashaninka activists Edwin Chota, Jorge Ríos, Leoncio Quinticima, and Francisco Pinedo.

To be held in Lima, Peru in December 2014, the UNFCCC 20th Council of Parties (COP) will bring together government leaders from around the world, as well as those who wish to influence them.

See the presentation, in Spanish, here.

11/25/2019
A number of threatened tree species have been given a new lease on life. At its 18th Conference of the Parties (CoP18) in August 2019, CITES granted protection to several species – adding them to Appendix II of the binding global wildlife treaty. Ninety days after the decisions were taken in Geneva, the listings for mukula and mulanje cedar are now coming into effect.
See all Blog Posts

12/05/2019
In Zambia the Environmental Investigation Agency (EIA) found that a handful of very high profile figures have apparently orchestrated and facilitated massive trafficking operations for years that are driving mukula rosewood trees to the edge of commercial extinction, devastating vulnerable forests and threatening communities’ livelihoods.

10/18/2019
Mr. Lu is the Secretary of the Association of Overseas Chinese in Gabon and a leading figure in the Forest Union of the Asian Industry in Gabon (UFIAG). He doesn’t miss an opportunity to publicly defend Chinese logging companies in Gabon, and to assert that these entrepreneurs operate with the best of intentions.
See all Videos