As countries negotiate a global phasedown of hydrofluorocarbons (HFCs) under the Montreal Protocol, institutions and companies are increasingly looking for climate-friendly cooling to aid global efforts to stay under the Paris Agreement’s 1.5°C goal.

Developing a long-term solution to its cooling needs, Cornell University harnesses the naturally cold water of Cayuga Lake in order to save money, time, energy, and the climate. Beginning its operation in 2000, Cornell’s Lake Source Cooling (LSC) plant revolutionized university sustainability with its use of “not-in-kind” cooling technology on a grand scale. A “not-in-kind” cooling technology is any system that breaks with conventional technology reliant on gaseous refrigerants used in the vapor compression cycle. Cornell chose to leapfrog transitional super greenhouse gases and implement a cutting-edge and climate-friendly technology.

In the late 1980s and early 1990s, most institutions, including Cornell, used CFC chillers. These first-generation Ozone-Depleting Substances (ODSs) were destroying the ozone layer and warming the climate. When the university had to phase out its aging CFC chillers due to unreliability and CFC bans under the Montreal Protocol, researchers and engineers looked down the campus slopes towards the cold and deep waters of Cayuga Lake.

Though there were certain manmade chemicals that could have served as replacements in their installed chillers, the newly-patented gases also ate away at the ozone layer and warmed the climate, serving as inefficient transitional chemicals. So, taking into account sustainability in its growth strategy and climate-friendly technology adoption, Cornell designed and built the United States’ first major deep water cooling system. Though construction of the plant cost $20 million more than replacing existing chillers, the Lake Source Cooling (LSC) plant has a 100 year expected lifespan – significantly longer than conventional chillers. Additionally, the plant uses 86 percent less energy, equivalent to 25,000,000 kWh/year. In other words, the energy saving equates to 856 pounds of coal burned yearly for every Cornell student, professor, and worker.

The energy efficiency increases alone represent a yearly savings of approximately $4.1 million. After roughly five years, this yearly savings covered the difference in upfront costs between conventional chillers and the deep water cooling system, demonstrating the sustainability of this investment in addressing goals of a carbon neutral future and the university’s role as a catalyst in energy-use innovation.

How does it work?

The Lake Source Cooling plant works much like its name suggests. The system uses two closed loops of water, pumping the naturally cold water from deep in the lake to the plant. The heat exchanger then uses the natural thermodynamic process of heat transfer to “transfer the cool” to the loop of water returning to campus, providing the necessary chilling power required by the dormitories, libraries, dining halls, and research labs. This passive technology relies on simple physical properties, gravity, and thermodynamic transfer, while only using pumping power to get the chilled water back up the slope. This simplicity allows the system to operate autonomously while electronically accounting for the yearly cycle in chilling needs. 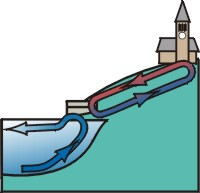 While understanding the major investment and impact that a project of this scale would take, Cornell included the community in the design and planning of the plant, incorporating local businesses and citizens when making its decision. Additionally, the university feeds its excess cooling capacity to the local community.

A model for other institutions?

While using Cornell as a prime example of cooling innovation, the National Renewable Energy Laboratory (NREL) provides all considerations that a system like Cornell’s must consider; including questions such as whether the institution is “located within a few miles of a deep lake or cold ocean currents” and if it will need “to replace refrigerant chillers” or “build or expand a district cooling [system].” 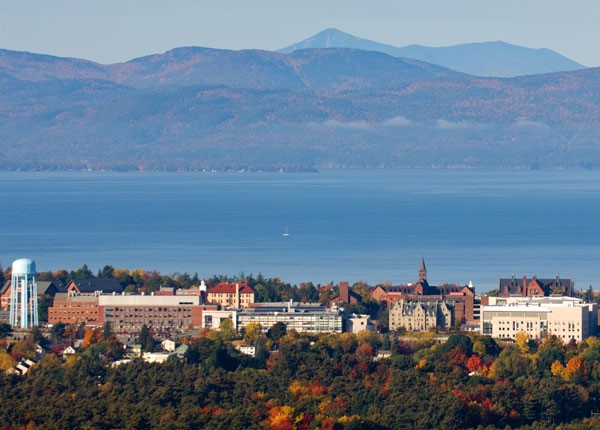 One institution where this model could work is the University of Vermont; the university’s location on Lake Champlain, onshore approximately 2-3 miles from the deepest parts of the lake, represents an opportunity to implement climate-friendly cooling technology. Additionally, the environmental goals set out by the university, as well as the city of Burlington’s commitment to progressive environmental standards, create an opportunity for the implementation of a system similar to the LSC plant. Similar to the University of Vermont's key location next to Lake Champlain, NREL advises institutions along the Great Lakes to consider these technologies as well, as the Great Lakes have “some of the deepest and coldest fresh water lakes in the world.”