On April 19, 2013, the Japanese Cabinet approved the revision of its fluorocarbon regulations that will fundamentally change the way high global warming fluorocarbons are produced, used and disposed in Japan. It also will lead to a phase-down of the “super” greenhouse gases, hydrofluorocarbons (HFCs), which are hundreds and thousands of times more damaging to the global climate than carbon dioxide. HFCs have been commercialized to replace the chemicals that were destroying the ozone layer, but while HFCs do not destroy ozone, they have extremely high global warming potentials and are contributing to global climate change. HFCs are primarily used in refrigeration, air conditioning, foam blowing, as fire suppressants, solvents and aerosols. However, viable commercial alternatives that do not destroy the climate, exist for most of these uses.

Although Japan has been a consistent supporter of a global phase-down of the HFCs at the Montreal Protocol, with this revision of its fluorocarbon regulations, Japan has joined the European Union and Australia in also reducing the use of these potent gases domestically in advance of any international agreement.

The “Act for Partial Revision of the Act on Ensuring the Implementation of Recovery and Destruction of Fluorocarbons concerning Designated Products,” implements measures at each step of the fluorocarbons life-cycle - from manufacturing to disposal of the gases as well as regulating the products that use these gases. Among other requirements, the law requires that entities manufacturing and importing air conditioning and refrigeration units transition to either fluorocarbon-free refrigerants or low global warming fluorocarbons by certain target years. Congratulations, but…

This progressive step from Japan is a great news for the global climate. However, all the good it does, could be undone if Japan allows offset credits in its domestic carbon market based upon the capture and destruction of HFC-23 by companies in developing countries. HFC-23, a byproduct in the manufacture of the refrigerant hydrochlorofluorocarbon-22 (HCFC-22), is a powerful greenhouse gas with a global warming potential that is 14,800 times that of CO2. In developed countries, HFC-23 is destroyed as a cost of doing business. HFC-23 destruction credits were allowed under the Clean Development Mechanism (CDM) of the Climate Treaty (UNFCCC) for HFC-23 destroyed in developing countries. However, since the cost of destruction was a tiny fraction of the value of the credits, HFC-23 destruction led to billions of dollars in profits for a handful of plants mostly located in China and India. Additionally, HFC-23 credits resulted in gaming and fraud in the production of HCFC-22 and diverted almost half of the CDM funds from renewable energy and conservation to bogus destruction of HFC-23. Destruction of HFC-23 paid on a CO2 equivalent tonne basis does not represent real emission reductions.

Due to concerns about the “non-additionality, environmental merit, cost-effectiveness and competitive distortions of HFC-23 credits” the European Union agreed to ban the use of HFC-23 credits from the European Emissions Trading Scheme (ETS) starting in 2013. Led by the Danish Government, most E.U. member states have also voluntarily, extended the ban to their national carbon credit registries for non-traded sectors. CERs from HFC-23 destruction projects have been banned in the Australian and the New Zealand carbon markets as well.

Japan is the only major carbon market to remain silent on the use of HFC-23 offset credits and the only place that has the potential to recapitalize these ‘toxic’ credits, this discredited industry and this failed mechanism for climate mitigation. That is why, EIA sent a letter to the Japanese Prime Minister, urging him to ensure that Japan’s new carbon trading scheme, the Bilateral Offset Credit Mechanism (BOCM) does not use HFC-23 credits. While we laud the Japanese Cabinet for taking this landmark step forward to control domestic use of HFCs, we continue to urge Japan to join the European Union, Australia, and New Zealand in declaring that they will not use, or allow Japanese companies to use, the bogus carbon offsets from the destruction of HFC-23, that do more harm than good for the climate. If Japan needs additional offset credits due to its decisions concerning nuclear power or to otherwise meet its promised mitigation targets, it should use the money to jumpstart the phase-out of all HFCs including HFC-23 for incremental costs. Japan must not continue the perverse incentives that the world has worked so hard to eliminate.

Australia, EU and Japan already in: where are you, U.S.?

Although the United States has been leading at the Montreal Protocol for a global phase-down of HFCs, HFC use in the United States is increasing. The Government has yet to act to effectively control HFC emissions or to implement serious domestic policies or legislation to reduce their use. The revision of the European F-Gas Regulation to implement a systemic phase-down of HFCs is in full-swing in the EU and Australia implemented a carbon tax on HFCs last year. The United States, which is the largest user of HFCs in the world, is the only major industrialized country left behind not taking definitive actions to phase down its own use of HFCs. 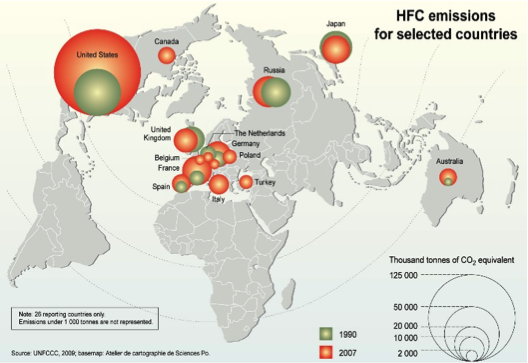 The US has the highest HFC emissions of any country in the world (Data Source: UNFCCC 2009)

EIA calls on the U.S. Government to take immediate steps to phase-out the unnecessary uses and emissions of HFCs domestically. The U.S. Environmental Protection Agency must issue regulations reducing the allowable emissions from products containing or using HFCs; mandating tighter reduction, recovery and reuse requirements; and barring the use of HFCs where low global warming alternatives are commercially available.

The United States needs to join the rest of the industrialized countries and take serious actions domestically if it is going to convince the developing countries that they should agree to the proposal for a phase-down of HFCs. With EU, Japan and Australia already in, the world is looking once again to the United States for action on climate. It is time for the U.S. to lead by example and show the world that it is serious about eliminating the “super greenhouse gases.” Actions do, after all, speak louder than words.