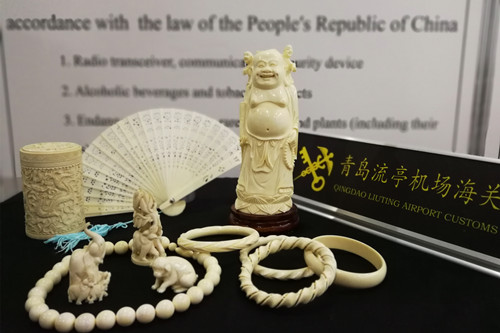 11 ivory items seized from Chinese passenger arriving from Tokyo.2
EIA has documented 72 seizures of Japanese ivory made in China since 2018, when China’s ivory ban went into effect. While these seizures are typically small amounts of ivory, they have been continuous and increasing and are likely a significant underestimate of the actual level of illegal trade. In some cases, Chinese ivory traders have relied on Japan’s legal market, online trade platforms, and lax export controls to supply their ivory inventory for re-sale to customers throughout China. Products seized include statues and carvings, jewelry, hanko name seal blanks, painting shaft heads, and whole tusks.

Ivory scroll paintings seized in mail from Japan.3
These seizures of legally purchased ivory in Japan make it clear that Japan’s domestic ivory market poses a threat to international efforts to combat poaching and the illegal ivory trade, particularly as others close their own domestic trades and markets shift.

01/29/2021
Newly released rhino population data reveals how the protracted poaching crisis fueled by consumer demand for rhino horn in Asia has decimated Kruger’s rhino population over the past decade.

09/22/2020
Today marks the 10 years since the first World Rhino Day celebration on September 22, 2010. The past decade has been fraught with challenges for the world’s rhinos, yet some progress has been made. If the next 10 years are to be better for rhinos than the past 10 years, we cannot afford to lose focus now.
See all Posts

NGO Appeal to Tokyo for Urgent Measures on Ivory

02/18/2021
EIA and 25 international non-government environmental and conservation organizations sent a letter February 18, 2021 to follow up on a previous appeal from March 2020. Our organizations encourage the closure of Tokyo's ivory market and also recommend some actions the Tokyo Metropolitan Government should take before the ivory market can be closed, including during the rescheduled 2020 Olympic Games. The letter can be viewed in English and Japanese.

12/17/2020
Investigations of Japanese hanko retailers revealed that many are willing to sell an ivory product knowing that it will be exported internationally despite most being aware that ivory export is illegal.