HCFC Phase-out: A Comparative Assessment of the Proposed Adjustments

HCFC Phase-out: A Comparative Assessment of the Proposed Adjustments 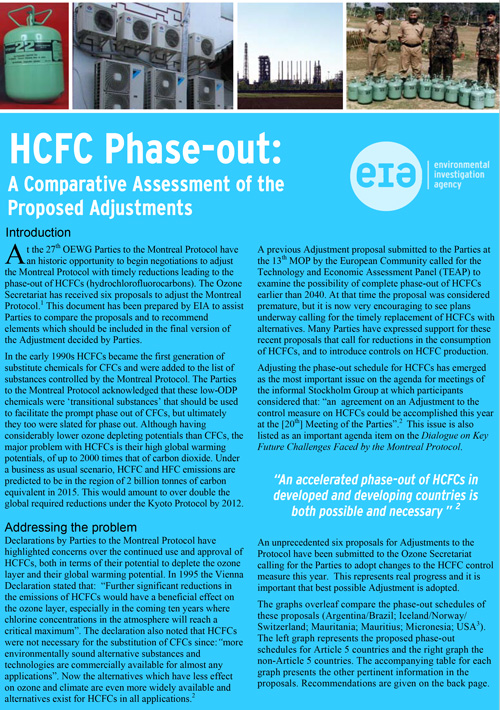 In the early 1990s HCFCs became the first generation of substitute chemicals for CFCs and were added to the list of substances controlled by the Montreal Protocol. The Parties to the Montreal Protocol acknowledged that these low-ODP chemicals were ‘transitional substances’ that should be used to facilitate the prompt phase out of CFCs, but ultimately they too were slated for phase out. Although having considerably lower ozone depleting potentials than CFCs, the major problem with HCFCs is their high global warming potentials, of up to 2000 times that of carbon dioxide. Under a business as usual scenario, HCFC and HFC emissions are predicted to be in the region of 2 billion tonnes of carbon equivalent in 2015.

05/15/2020
New world records will surely be set when Beijing hosts the next Winter Olympics in 2022, but these games are already making history for a different reason. It will be the first time that carbon dioxide (CO2) is used as a climate-friendly refrigerant to create the cooling in several ice rink venues for the Olympic Games.

Find a Climate-Friendly Supermarket Near You: A Global Tool

04/22/2020
This Earth Day, EIA is launching the expansion of the climate friendly supermarket map
See all Blog Posts

03/17/2020
Washington DC – A new paper published in Nature today warns that emissions from ‘banks’ of ozone-destroying CFCs, could potentially delay the Antarctic ozone hole recovery by about six years. The new paper, Quantifying contributions of chlorofluorocarbon banks to emissions and impacts on the ozone layer and climate, also estimates that future emissions from current CFC banks could lead to an additional 9 billion metric tonnes CO2e between 2020 and 2100.

07/08/2018
Information obtained by the Environmental Investigation Agency (EIA) demonstrates conclusively that the use of CFC-11 in China’s rigid polyurethane (PU) foam insulation sector, in particular in the building and construction subsector, is widespread and pervasive. CFC-11 is used as a foam blowing agent for the manufacture of molded foam panels and spray foam used for insulation purposes
See all Videos