The eastern European country of Romania contains two-thirds of Europe’s last remaining virgin forests, home to the continent’s largest populations of wolves, bears, and lynx. But, illegal logging and poor forest governance have led to severe deforestation in once-pristine forests. An analysis of satellite data by the University of Maryland and Greenpeace showed that Romania lost 280,000 hectares of forest between 2000 and 2014. Almost half of this forest lost was located within national parks and other protected areas.

Illegal logging in Romania has been widely recognized by the government, media, and environmental activists as a serious problem for over a decade. A recent study by the Romanian National Forest Inventory concluded that in each year between 2008 and 2014, 8.8 million m3 of timber was cut illegally – equivalent to 49% of the timber cut during this period. However, this study did not take into account all forms of illegal logging, such as timber cut on land illegally restituted in the post-Communist era, a prevalent form of illegality in the Romanian forest sector.

In the 25 years since the fall of Communism in 1989, Romania has embraced capitalism, welcoming foreign investment and companies. Of those, an Austrian timber and wood processing company named Holzindustrie Schweighofer (Schweighofer) has taken the greatest advantage of all, and in 2014 processed around one-third of the country’s total annual softwood production, including large amounts of illegal wood. 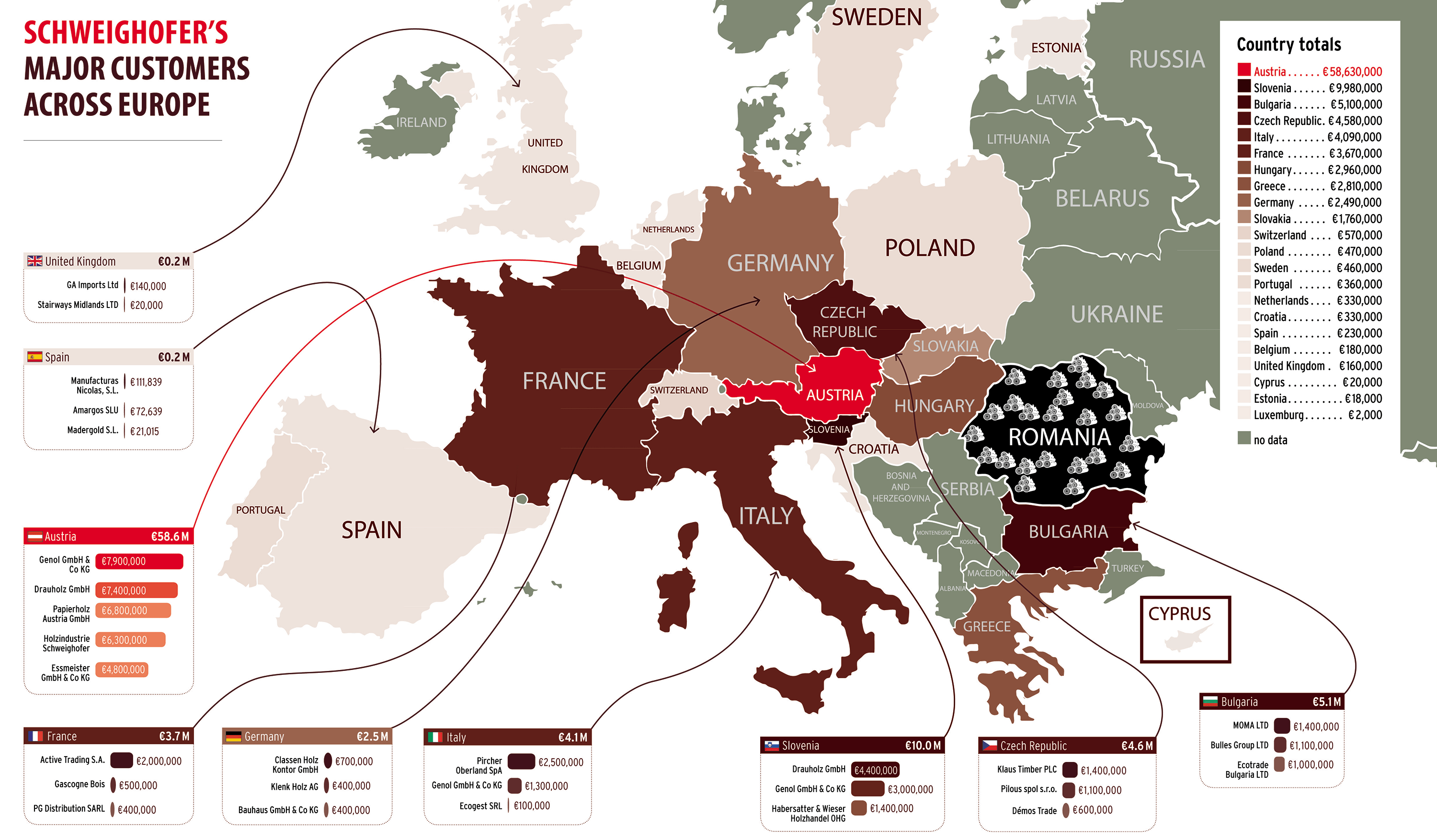 Schweighofer sells its pellets, briquettes, and other wood products within Europe, to nearly every European Union (EU) member state, and around the world. Its customers include Europe’s top biomass companies such as Austrian firms Genol and Drauholz, and some of Europe’s largest DIY (“Do-It-Yourself” home improvement) stores, including Hornbach (Germany), Baumax (Austria/Germany), and Bricostore (owned by UK-based Kingfisher). EIA investigations show that Schweighofer has actively incentivized illegal timber suppliers and has bought tens of thousands of cubic meters of timber illegally sourced from public forests, national parks, and private lands seized from its rightful owners.

In October 2015, following a two-year investigation into illegal logging in Romania, EIA published evidence in a new report, Stealing the Last Forest, showing that Schweighofer was the single biggest driver of illegal logging in the country over the previous decade. By 2015, the company was the largest buyer of softwood timber in Romania, but lacked effective measures to avoid sourcing illegal wood.

An undercover investigation showed Schweighofer’s Austrian manager, official who was most influential in setting up the company’s Romanian operations, openly accepting illegal wood and further, offering bonuses for suppliers of illicit timber. In most of the instances of illegal logging EIA encountered in the field, loggers sold the timber to Schweighofer’s mills. Through a series of case studies spanning a decade, this report documents specific examples in which Schweighofer has received illegal timber, and shows the consequences to Romania’s forests, national parks, and communities.

The outlook for reform

The Romanian government has recently enacted a new Forest Code. Development of implementing regulations for this law must involve civil society and all stakeholders, and must ensure that Romania’s forest protections are strengthened to guarantee the future viability of the country’s forest products industry. In early 2016, Romania’s President Klaus Iohannis signed a bill making illegal logging of more than one hectare a threat to national security, signaling the importance of this issue to Romania’s economy and development.

In May, 2015, the Romanian Ministry of the Environment conducted an investigation into Schweighofer’s Sebes and Radauti mills. Inspectors found that the company had purchased over 130,000 m3 of illegal timber from 27 suppliers in a single county. The Ministry’s report documented cases in which Schweighofer employees formed part of organized criminal networks for the purpose of obtaining illegal timber. Due to the seriousness of these findings, the Ministry handed the case to prosecutors in Romania’s organized crimes division. As of April 2016, the case remains under active investigation.

In April 2016, the FSC began an official investigation into suspected violations by Schweighofer of FSC’s Policy of Association.

EUTR failing to stop illegal logging inside the EU

Given the recent enactment of the EU Timber Regulation (EUTR), the high amount of ongoing illegal logging in Romania highlights key challenges for this law to address illegal logging within the European Union’s own borders. The large number of shipments of high-risk timber from Schweighofer throughout Europe illustrates the need for European companies to perform significant due diligence measures when sourcing from areas of high-risk of illegal logging, even when these supplies originate within Europe and come from an Austrian company advertising 400 years of forestry experience.

The Executive Summary is provided in German here.

The Executive Summary is provided in Romanian here.

Romanian customs data shows that Japan’s largest trading companies have bought around half of all Schweighofer’s exports from at least 2010 through the end of 2015. This data shows that these buyers have continued sourcing from Schweighofer despite extensive reports from the Romanian government, FSC, and domestic and international NGOs and media during this period and through the end of 2015.

December 22, 2014 – Romanian organization Agent Green releases a video in which the organization’s director is beaten and pepper-sprayed by Schweighofer’s guards while tracking illegal timber to a Schweighofer mill (the investigation was conducted earlier that year)

April 2015 – Romanian media releases a leaked letter from September 2014, sent from Schweighofer CEO, Gerald Schweighofer, to the Romanian Prime Minister demanding that a proposed forest law be amended, threatening consequences to trade relations between Austria and Romania if not

May 9, 2015 – Following EIA’s video and the Der Spiegel article, thousands of Romanians protest in the streets of Bucharest, outraged over the forest destruction in Romania

July 2015 – Romanian Ministry of Environment, Water and Forests announces an investigation of Schweighofer’s operations found various violations of the law, including illegally logged timber. The investigation report is handed over to the Prosecutor’s Office of Romania’s Supreme Court of Justice

August 6, 2015 – Forest certification body, PEFC files a complaint on compliance against Schweighofer in light of EIA’s April video and an investigation by the Romanian government

February 18, 2016 – Schweighofer releases a “counter-report” purporting to disprove EIA’s findings. None of the company’s claims counter any of EIA’s evidence, proving the strength of EIA’s report.

February 19, 2016 – FSC announces that it has launched a formal investigation into Schweighofer for suspicion of trading illegal timber.

March 8, 2016 – EIA releases a video illustrating the case of Agent Green, a Romanian NGO which tracked illegally-logged timber from Retezat National Park into Schweighofer’s Sebes mill, where NGO staff was beaten and pepper-sprayed by the company’s guards

06/17/2021
During its meeting this week, the Forest Stewardship Council's (FSC) Board of Directors will determine whether to end its disassociation with one of the largest timber processors in Europe, the Austrian HS Timber Group (formerly known as Holzindustrie Schweighofer). At stake is not only HS Timber's hoped-for shot at restoring its name after a series of scandals, but also the reputation and the future of the FSC itself.
See all Blog Posts

11/02/2021
As the COP climate talks begin in Glasgow, the Forest Stewardship Council (FSC) is opening its doors to one of Europe's worst forest offenders, HS Timber Group.
See all Press Releases